We’ve published a paper in Computational Statistics describing “A sparse hierarchical Bayesian model for detecting relevant antigenic sites in virus evolution”. This work, led by Vinny Davies and Dirk Husmeier (Glasgow Uni, school of Mathematics and Statistics), involved the development of a Bayesian model for identifying amino acid positions where substitutions are responsible for antigenic change. These substitutions enable viruses to escape existing immunity in the host population that arises following infection or vaccination.

The model attributes variation in antigenic assay titres to the presence of substitutions at each amino acid position while taking a phylogenetic comparative approach to account for the shared evolution of viruses. Variable selection is achieved using slab-and-spike priors, with a posterior inclusion probability estimated for each amino acid residue; the proportion of MCMC steps in which a residue is included that reflects confidence that a residue is in the “true” model. We’ve previously validated a conceptually similar frequentist approach experimentally in Harvey et al. (2016) and Reeve et al. (2016) .

The advantages of the Bayesian model over alternative established methods are demonstrated via simulations and the model is applied to foot-and-mouth disease data generated in Francois Maree’s lab in Onderstepoort and influenza A(H1N1) data collected at the World Influenza Centre. Known antigenic regions of the H1 haemagglutinin are shown on the structure of A/Puerto Rico/8/34 (H1N1) to the left below. On the same structure to the right I’ve coloured identified residues according to their posterior inclusion probabilities (values are indicated on the scale below). 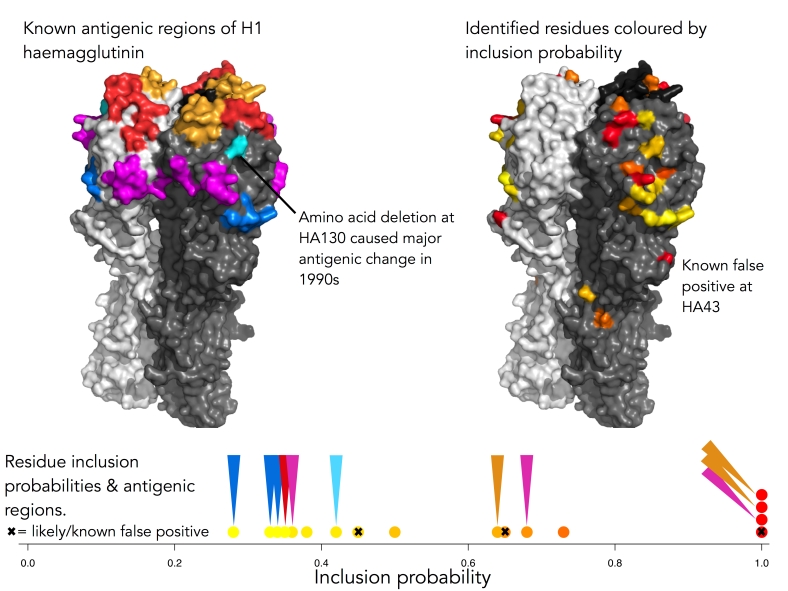 We identify residues belonging to each of the known H1 HA antigenic regions (Ca, magenta; Cb, blue; Sa, red; Sb, orange; and HA130, cyan) and these comprise a good proportion of identified residues (11/17). Of the remaining sites identified, there are three amino acid residues close to known sites that represent plausible candidates. A Bayesian approach shows real promise for antigenic analyses involving many variables and though currently restricted to smaller datasets, we are working towards the analysis of larger datasets.

In 2009 the lineage of A(H1N1) viruses studied here were supplanted in the human population by another strain, A(H1N1)pdm09, that emerged causing the ‘swine-flu’ pandemic. Though the A(H1N1) strains studied no longer remain a threat to the human population in it’s own right, we never know when knowledge of this virus may prove useful.

Only last year we saw the WHO recommend a change to the A(H1N1)pdm09 vaccine strain ahead of the 2017 Southern Hemisphere flu season as an indirect consequence of an amino acid substitution occurring in 1986. A substitution arising in 2013-14 reduced the effectiveness of the previous A(H1N1)pdm09 vaccine, but only in individuals exposed to pre-’86 A(H1N1) viruses as a result of a change in epitope immunodominance caused by the ’86 substitution.

One thought on “Bayesian identification of sites responsible for antigenic change”