Antigenic drift of influenza viruses requires frequent updates to the vaccine to ensure it remains able to offer good levels of protection against circulating strains. A little over a month ago, in late February, the WHO published its influenza vaccine strain recommendations ahead of the 2020-21 winter in the Northern Hemisphere. It  recommended updates to both of the influenza A subtypes included in the vaccine, A(H1N1) and A(H3N2), while the influenza B component should remain the same as that included in the vaccine for the 2020 Southern Hemisphere flu season (vaccination for this is starting around about now).

During the past few weeks in conversations surrounding the current Covid-19 pandemic, I’ve heard various mentions of the period of stasis for the H1N1 vaccine component  introduced following the 2009 “Swine flu” pandemic. Encountering a novel virus, it’s expected that the human population will take some time to build up a level of immunity before there is strong selection for antigenic variants. I wanted to remind myself how long this period was and decided that, in order to give context, I’d plot out all the updates to the various components of the flu vaccine through time.

The plot below dates back to 1968 when a new vaccine was introduced in response to A(H3N2) strain that caused a global pandemic (“Hong Kong flu“), and displaced the A(H2N2) viruses that had circulated in the human population since 1957. The plot includes A(H3N2), influenza B, and A(H1N1) following the re-emergence of that subtype in the human population in 1977. 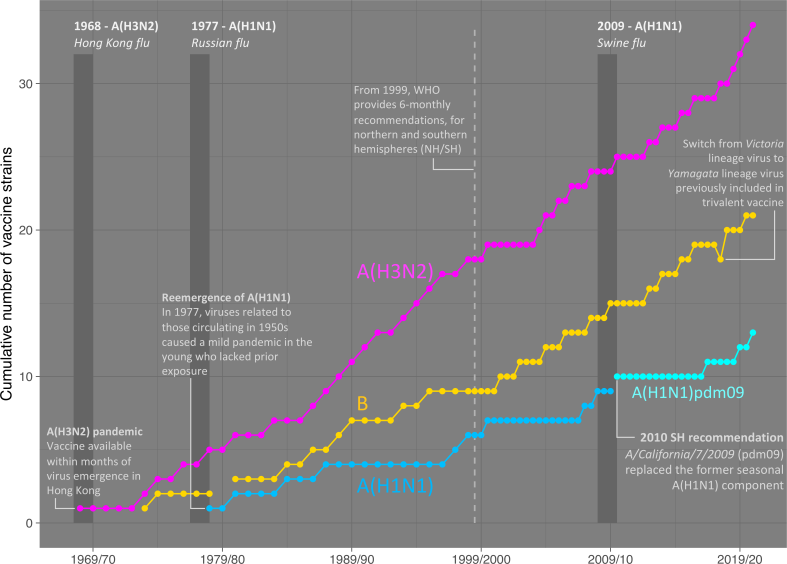 One of the first thing that jumped out at me is that the relatively long period of vaccine stasis following the 2009 pandemic was actually not atypical in comparison with the former seasonal A(H1N1) lineage. The former seasonal H1N1 viruses are descendants of the 1918 pandemic strain and circulated until their replacement by A(H2N2) viruses, which caused a pandemic in 1957, before reemerging in 1977. The vaccine strain introduced in response to the 2009 pandemic, A/California/7/2009, remained the recommendation for 6.5 years (2010 SH to 2016/17 NH). Looking back, we actually see other long periods without updates to the former seasonal H1N1 vaccine recommendation: 9 years with A/Singapore/6/86 (1987/88 to 1996/97, includes the widely used A/Singapore/6/86-like virus A/Texas/36/91) and 7 years with A/New Caledonia/20/99 (2000 SH to 2007 SH).

Since its introduction in the vaccine in 1978/79, the H1N1 component of the vaccine has seen 12 updates in 42 years. This translates to an average period of 3.5 years per vaccine strain (this rate is shared between the pre- and post- pandemic lineages). In contrast, the quite remarkable rate of antigenic evolution of H3N2 viruses has required 33 vaccine updates in 52 years, with an average of 1.6 years per vaccine. The contrast in rates between the flu A subtypes is stark; it has been shown that the slower rate of antigenic evolution of H1N1 coincides with a lower ages of infection and a slower rate of global circulation, compared with H3N2. These dynamics are complex and interesting, rapid antigenic drift of H3N2 viruses enables these viruses to reinfect adults with prior exposures more frequently. This results in these viruses being spread around the world more quickly (adults travel more frequently) and this itself could increase and facilitate competition between H3N2 antigenic variants hastening antigenic drift.

The rate of replacement for the influenza B vaccine falls between that of the two flu A subtypes, with 20 updates in 47 years and an average 2.3 years per vaccine. The plot shows the B component of the trivalent vaccine (H1N1/H3N2/B), though since the 2013 SH vaccine recommendation, the WHO has provided a second B virus to be included by manufacturers of quadrivalent influenza vaccines. Quadrivalent flu vaccines include two B viruses, one from each of the Victoria- and Yamagata-lineages that diverged in the 1970s. Circulation patterns govern which of the two B viruses are recommended for the trivalent vaccine. Since the 2013 SH recommendation, 2 of the 6 updates to the B component of the trivalent vaccine have involved a switch between the Victoria and Yamagata lineage. In one of these switches, Yamagata-lineage virus, B/Phuket/3073/2013, returned to the 2018 SH recommendation after two years of B/Brisbane/60/2008 (Victoria-lineage). I’m hoping to make a plot looking in greater detail at influenza B that will incorporate information on the two lineages at some point.

List of strains going back further at the Influenza Research Database

Collaborators at the Istituto Zooprofilattico Sperimentale delle Venezie (IZSVe) and I have been working to investigate characteristics of avian influenza epidemics.  We have recently published a paper in Transboundary and Emerging Diseases titled “Spatiotemporal reconstruction and transmission dynamics during the 2016-17 H5N8 highly pathogenic avian influenza epidemic in Italy”. The focus of this paper was to use integrated analyses of genetic sequences and associated metadata to learn about how the epidemic dispersed spatially and the host types involved in such movements. END_OF_DOCUMENT_TOKEN_TO_BE_REPLACED

I’ve been working with collaborators at the University of Glasgow and the Avian Influenza Group at the Pirbright Institute on the genetic basis of antigenic variation among avian influenza viruses. We’ve uploaded a manuscript to bioRxiv on “The molecular basis of A(H9N2) avian influenza viruses”. Thomas Peacock and I share the lead authorship on this work, we’ve used a combination of experimental and computational approaches to explore the genetic basis of immune escape by these viruses. END_OF_DOCUMENT_TOKEN_TO_BE_REPLACED

In recent years there has been increasing attention paid to the consequences of egg-adaptation of influenza viruses. To remain effective, the flu vaccine is regularly updated to ensure that it remains a good antigenic match to circulating viruses. The H3N2 component of the vaccine has recently been less effective than expected, despite the vaccine strain being well-matched to circulating strains. This is partly due to changes that occur when the vaccine is grown in chicken eggs.

END_OF_DOCUMENT_TOKEN_TO_BE_REPLACED

Great efforts are made to understand what makes particular areas of a pathogen protein attractive to the immune system. A better understanding of the biophysical and structural features that underpin antibody-recognition of antigens may allow us to infer the relative importance of the different areas (epitopes) recognised by antibodies and to predict which mutations are most likely to result in new pathogen strains able to evade pre-existing immunity.